There’s a lot of overlap between bike types these days, so you might find that you’ll end up assessing the pros and cons of several different bike categories before you can make a decision about which best suits your intended purpose. We have kept our categories as simple as possible rather than trying to cover the often confusing array of bike type tags that the manufacturers promote.

A ‘Hardtail’ is essentially any bike without rear suspension. The vast majority of hardtail mountain bikes come with a suspension fork. If you don’t feel that the riding you plan to do really warrants a suspension fork you might want to look at gravel bikes or hybrid bikes. 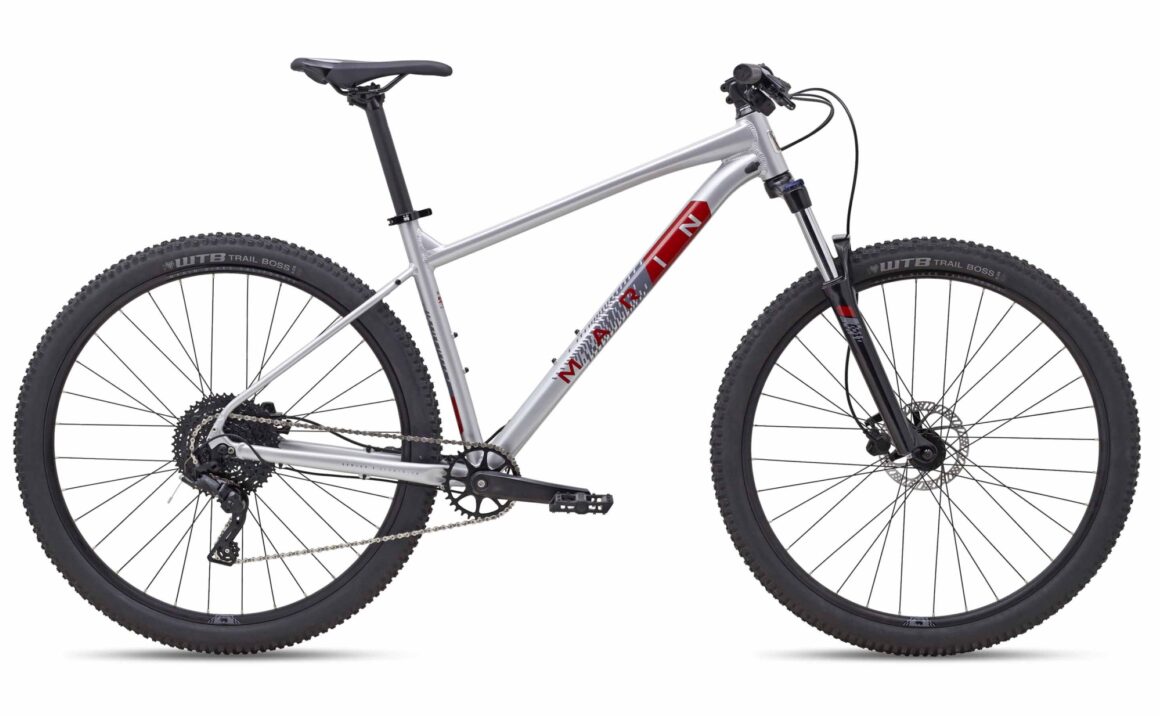 A lot of mountain bikes, especially in the lower price categories, are designed for general utilitarian use both on- and off-road. Such bikes will usually come with luggage rack mounting bosses on the frame and often have tyres with a faster rolling tread pattern for road use. If you plan to use such a bike for road more than off road you might prefer to get one with a lockout function on the suspension fork, or consider a rigid forked recreational road bike. 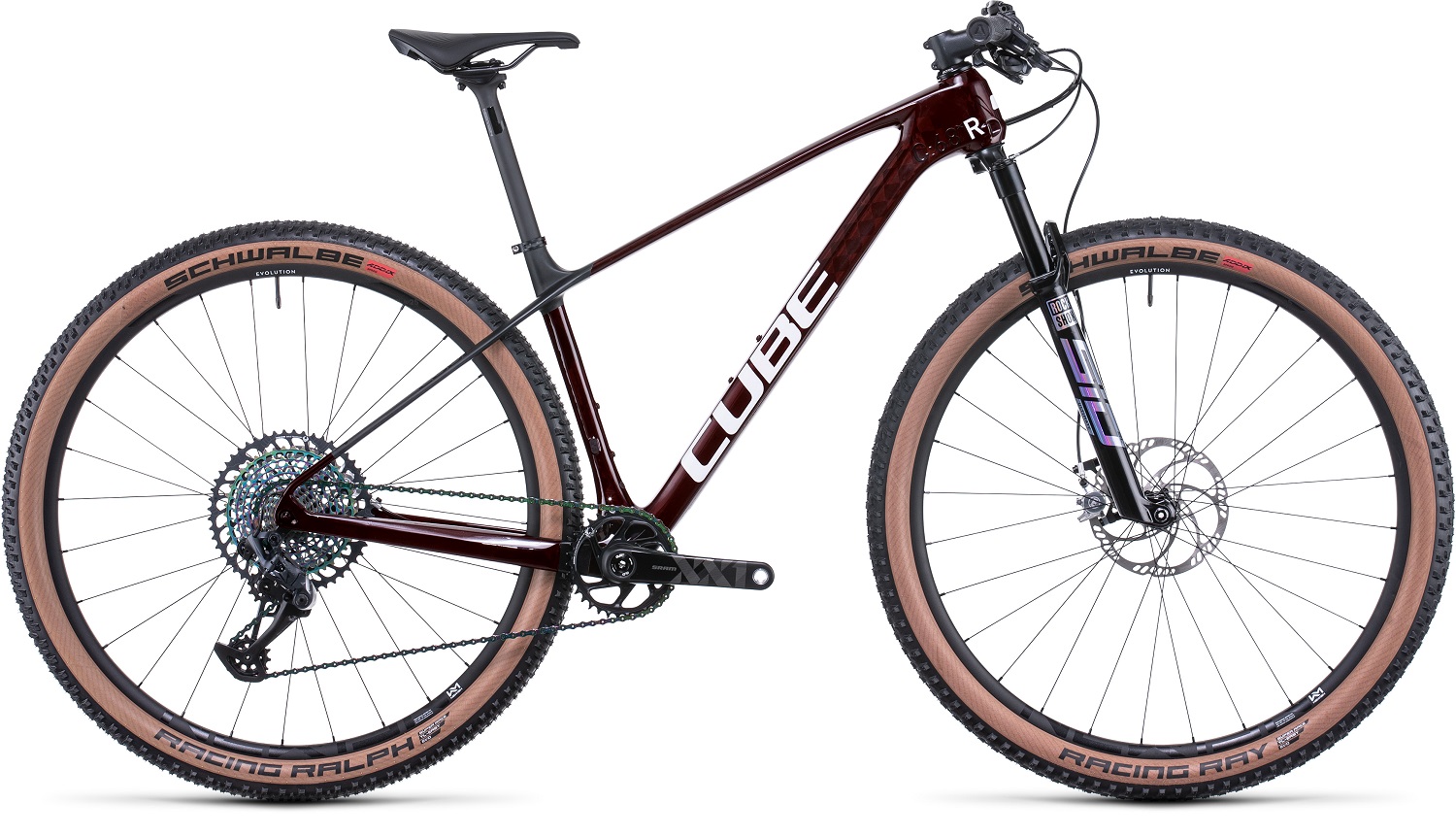 Cross Country (or XC) usually implies lighter weight for more speed on the sort of terrain where fast efficient climbing is a priority. Cross country racers will usually use such a bike but they’re certainly not only for racers. 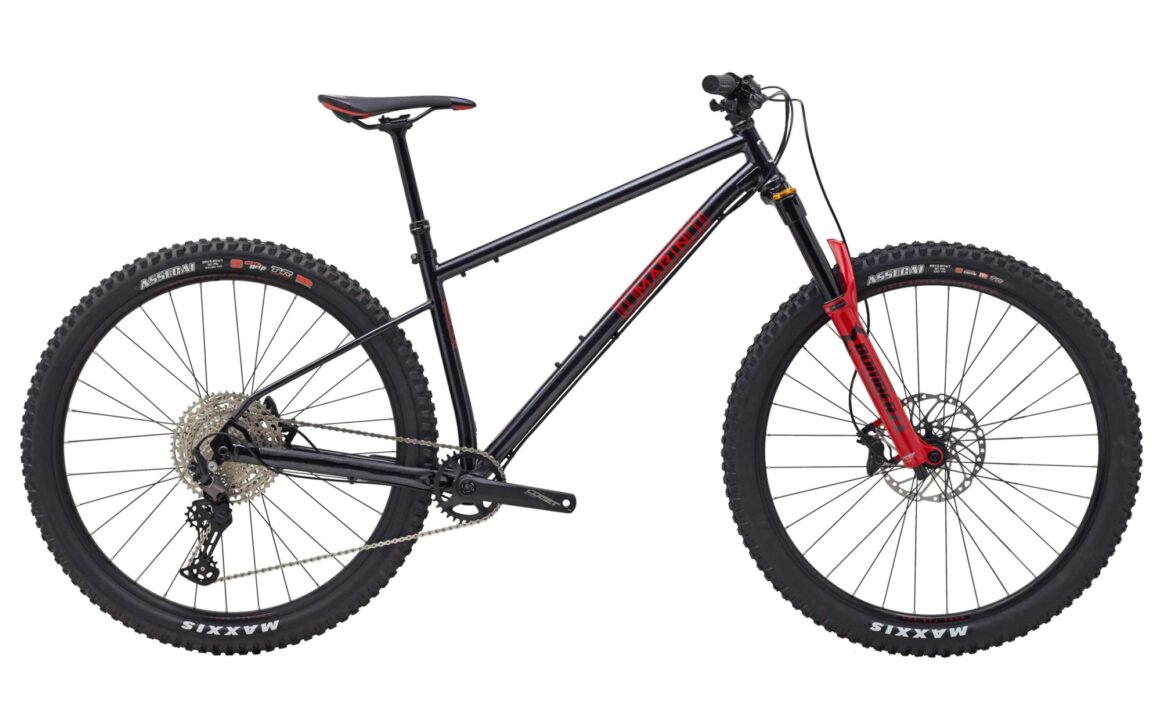 Trail will usually imply that the bike is suitable for heavier duty use. ‘Trail’ hardtails are slightly burlier in intent and often come equipped with a longer travel suspension fork than ‘XC’ hardtails. This is normally combined with larger tyres, frame geometry that is more biased for descending, wider handlebars and perhaps a dropper seatpost.

MTBs with both front and rear suspension divide into all sorts of different sub-categories, mainly (but not only) depending on how much suspension travel they offer. The lightest bikes with a minimum amount of suspension travel (80 to 120mm) are aimed at cross country riders looking for more comfort, control and damage avoidance than that offered by fast hardtails. The heaviest bikes are full-on downhill machines. The majority lie somewhere in between those extremes and come with wide variety of marketing category tags that let you conjure up images of the sort of riding you identify with or aspire to. 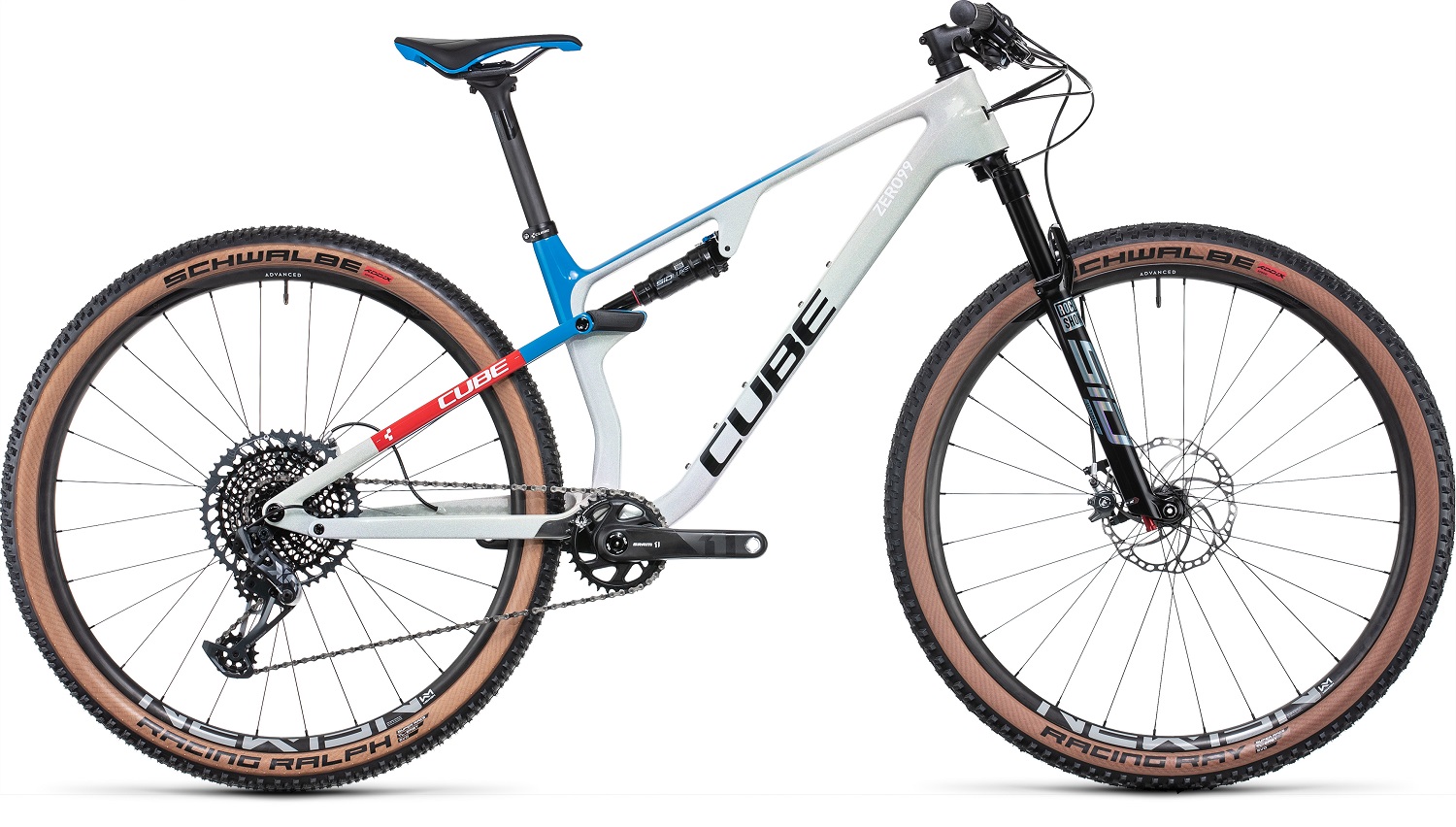 Cross country (XC) full suspension bikes are perfect for riders thinking about fast trail rides and perhaps the occasional competitive outing. They’re likely to have between 100 and 120mm of suspension travel and, depending on price, weigh somewhere between 24lb and 30lb. Top of the range XC Race models may weigh less, but at high cost. 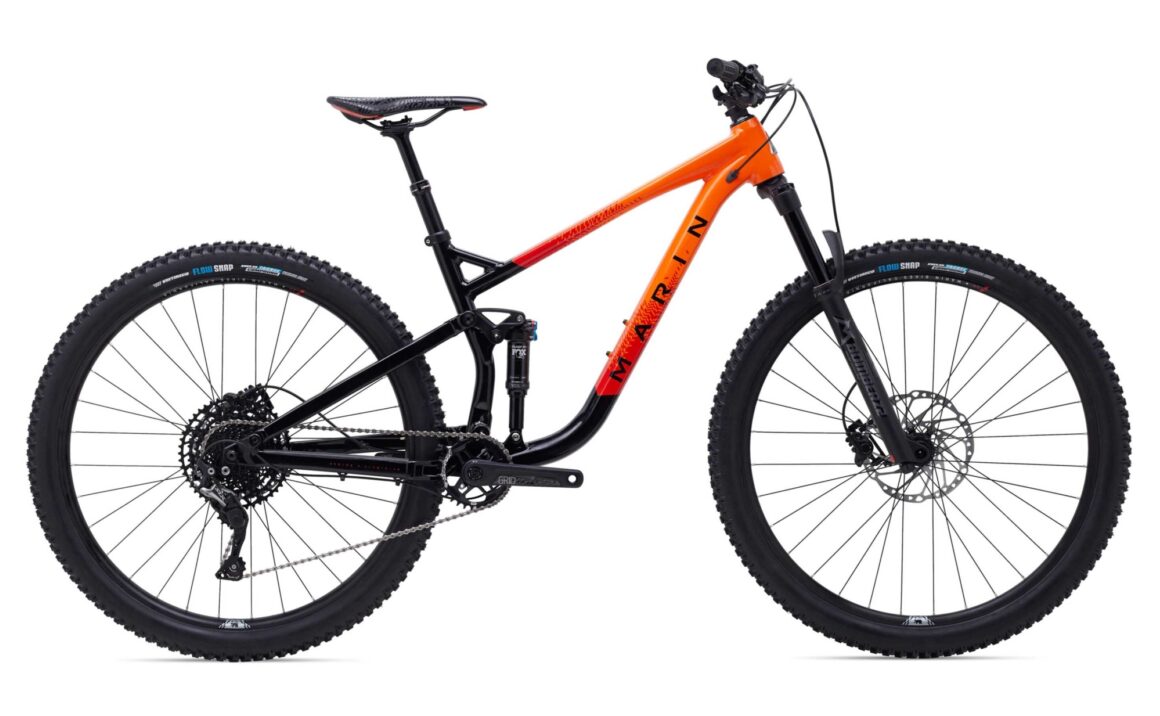 A full suspension bike bearing a ‘Trail’ or ‘All Mountain’ category tag is likely to be built with harder hitting terrain and riders in mind. It will weigh more than an XC model and offer from 120mm upwards of suspension travel.

‘All Mountain’ bikes tend to have a downhill fun bias but still have a good enough range of gears to haul you back up again. They vary a lot between different manufacturers, with some weighing in at close to the 30lb mark and others verging on the downhill/gravity bike heft. 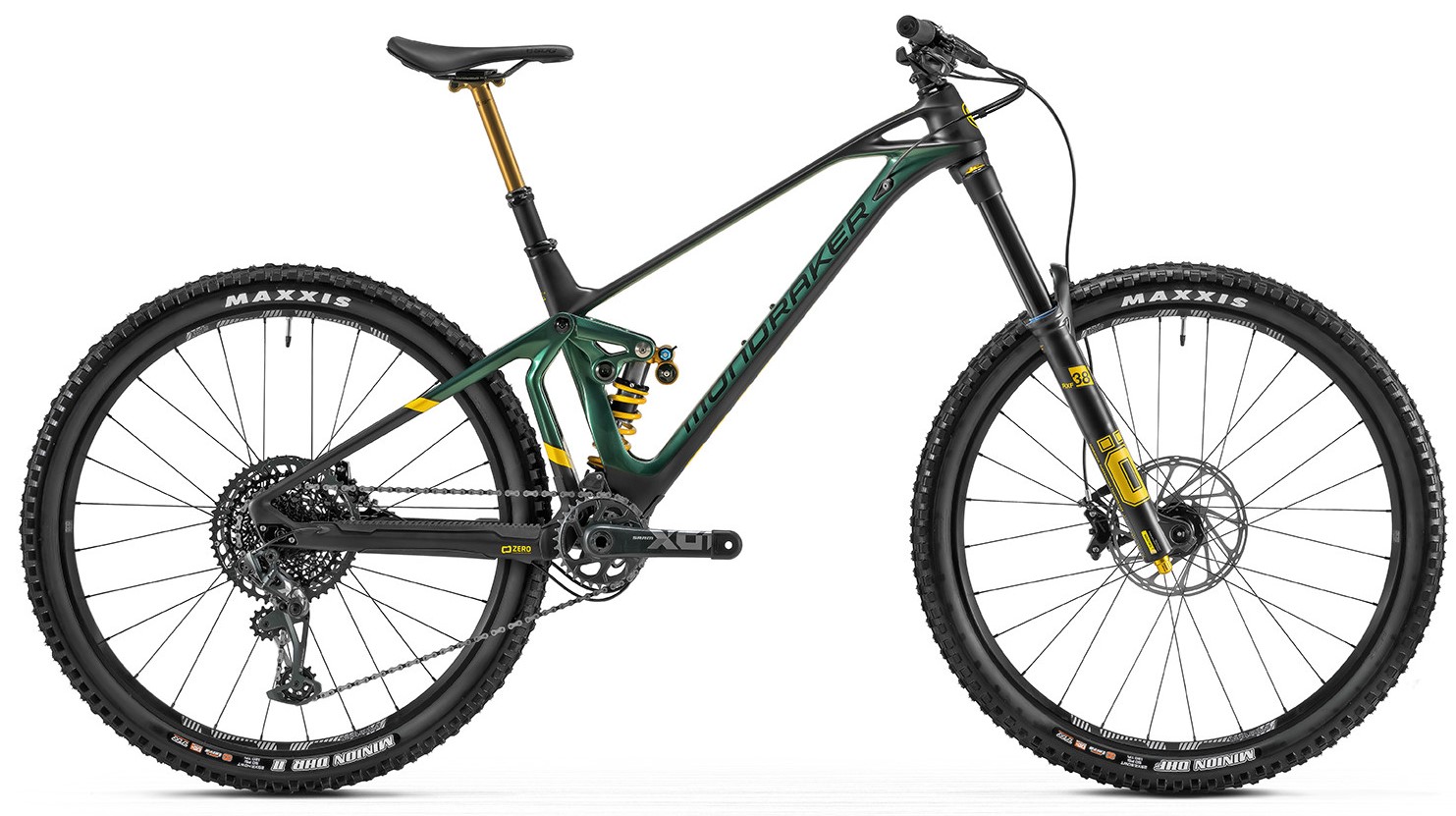 You’ll see a whole selection of longer travel full suspension bikes with ‘All Mountain’ or ‘Freeride’ category tags, and they all tend to be biased towards gravity fed terrain even if they come with a range of gears that allows you to ride back up again. Pure gravity bikes are made for downhill racing and lift-fed big mountain terrain. As such, they tend to be hard work (and heavy) to ride elsewhere.

The bigger the wheel, the more efficiently the wheel can roll over rough ground. But this can come at the cost of slightly reduced maneuverability. So if you want a fast, smooth ride 29” wheels are most likely the way to go.

If you prize maneuverability above all else then you may want pick a bike with 27.5” wheels.

Mullet bikes try to strike a balance between the two. The 29” front wheel gives the bike predictable, efficient grip combined with 27.5” rear wheel that allows bike designers to keep the chainstay of the bike short help to increase turning speed.

Wheel size is just one in a whole host factors that contribute to bike handling, so try not to focus to rigidly on a specific wheel size and check whether bike is designed for the type of terrain you want to ride on. 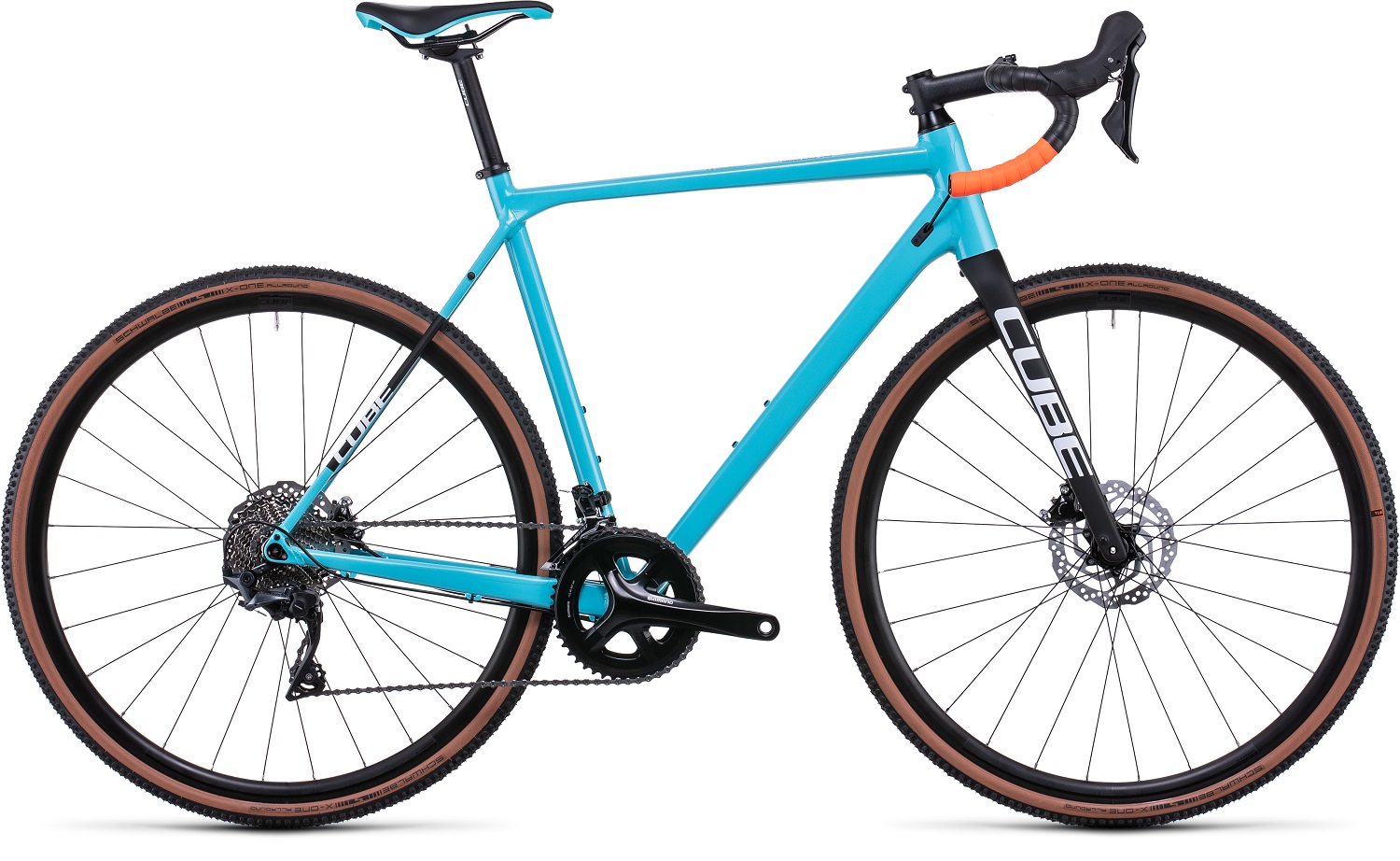 The off-road sport of cyclocross was around for over half a century before the mountain bike came along. It was essentially a winter race discipline for road racers. A typical cyclocross bike is very much like a typical road race bike but with slightly more relaxed geometry and room for moderately knobbly tyres. A modern cyclocross bike is likely to weigh well under 20lb and may have disc brakes. 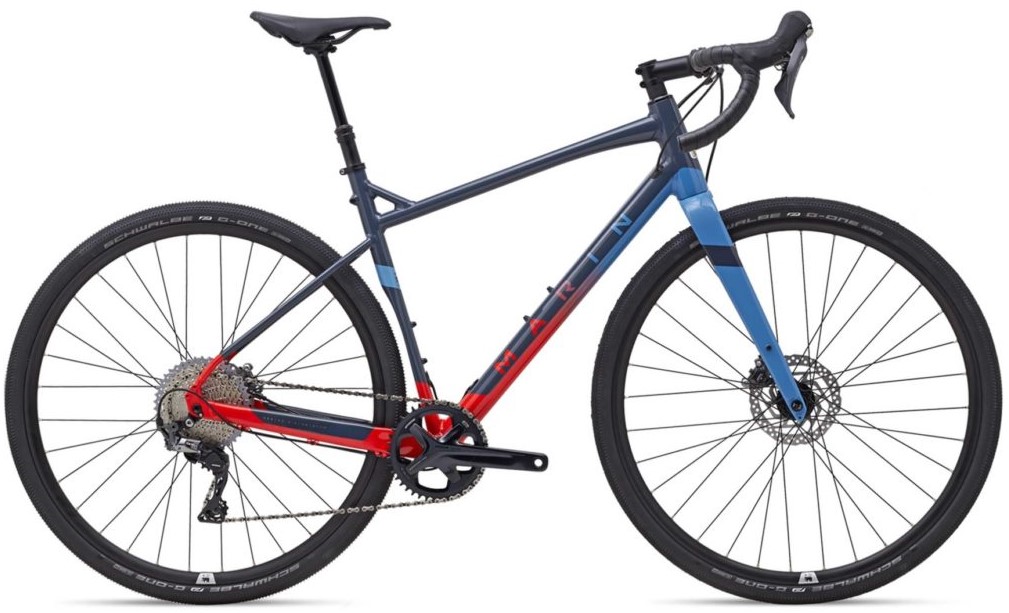 Gravel bikes like cyclocross bikes and road bikes have drop handlebars. They are designed to be at home on tarmac and loose off road surfaces like bridal ways and fire roads. They will have larger more comfortable tyres than a cyclocross bike along more stable handling. Often they will come with a range of luggage rack mounts and water bottle bosses.

It’s hard to know how many-sub categories road bikes should be divided into, but for relative ease of use we’ll stick to dropped handlebar bikes here and put the flat handlebar options in the ‘Hybrid Bikes’ category. 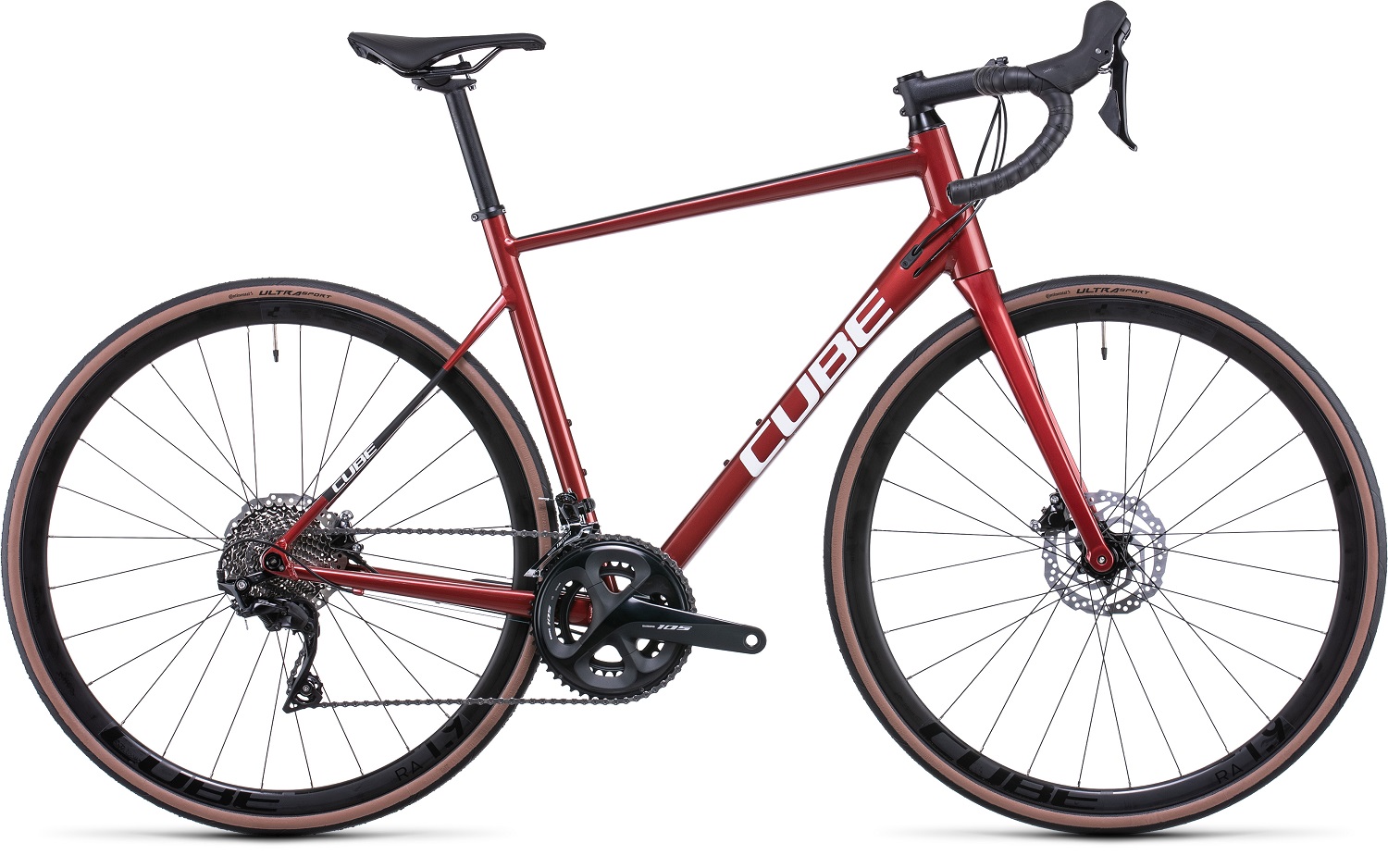 By ‘recreational road’ we mean bikes that fall slightly short of ‘competitive’, the sort that are likely to come with room for bigger profile touring type tyres and eyelets for mudguards and racks. It has to be said though that there’s nothing to stop you from taking part in ‘Sportif’ type organised road events on such a bike. There’s a fine line, often dictated by price or weight as much as anything else, between recreational road and competitive road, with various hybrid and cyclocross styles getting a look in if you’re looking for a do-everything bike.

A recreational road bike is likely to have easier gearing than a competitive road bike, with double ‘compact’ or triple chainrings up front. Expect to find slightly more relaxed frame geometry and ride positions than on ‘race’ bikes too. 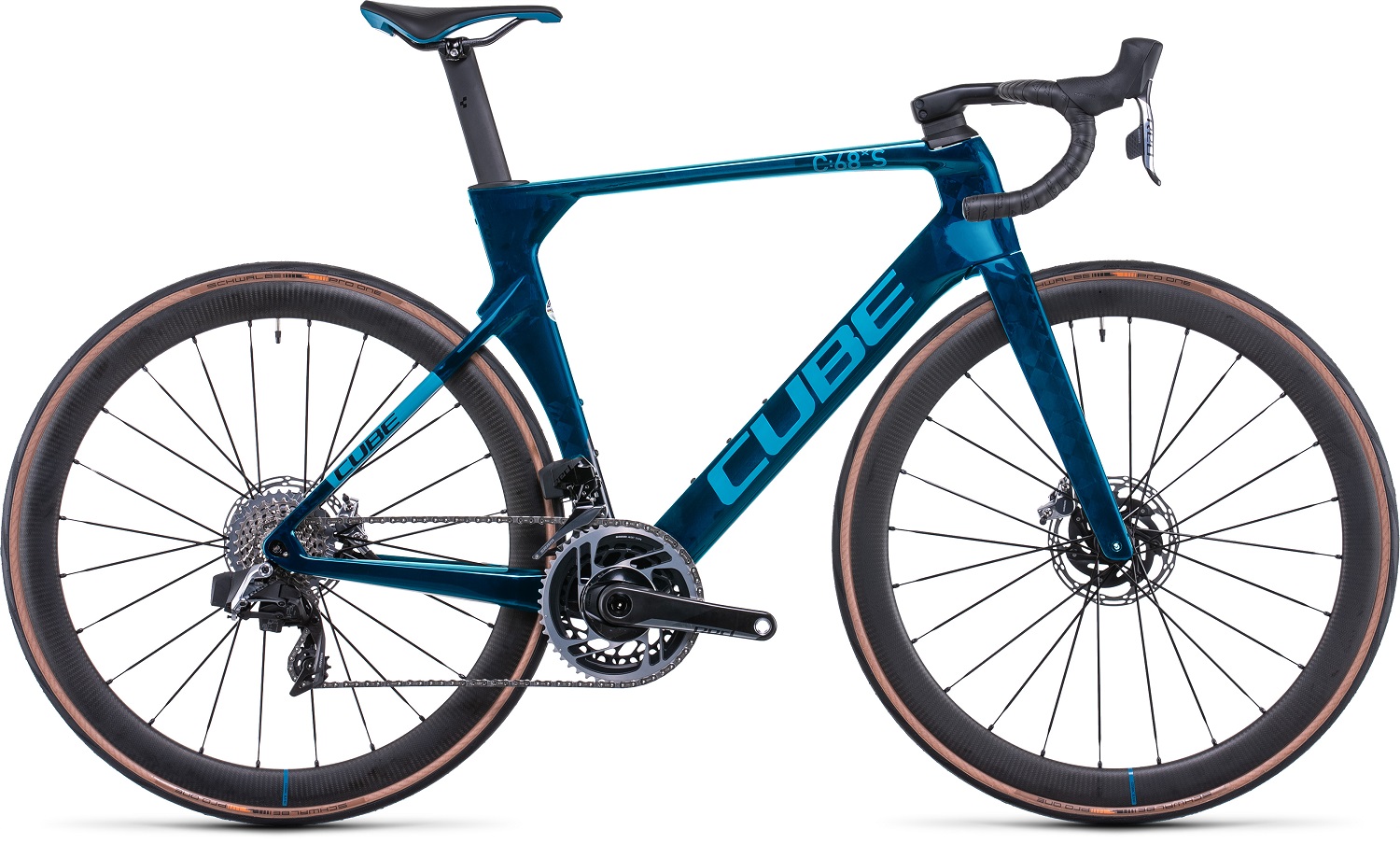 In terms of price, the sky’s the limit for competitive road bikes, and depending on how much you’re willing to pay you’ll be looking at weights from around 15 to 20lb. Carbon composite framed machines are generally the lightest, but it’s a very competitive market and there’s a massive variety of quality and prices in carbon and all other frame materials. Aluminium framed bikes are generally the cheapest, titanium frames vary in price almost as much as carbon, and a new generation of high quality steel frames are making their presence felt. A competitive road bike, or race bike, is likely to have more lively handling than a recreational road bike, with gearing aimed at riders who are fit enough not to worry about whether they’ll make it up the hills! 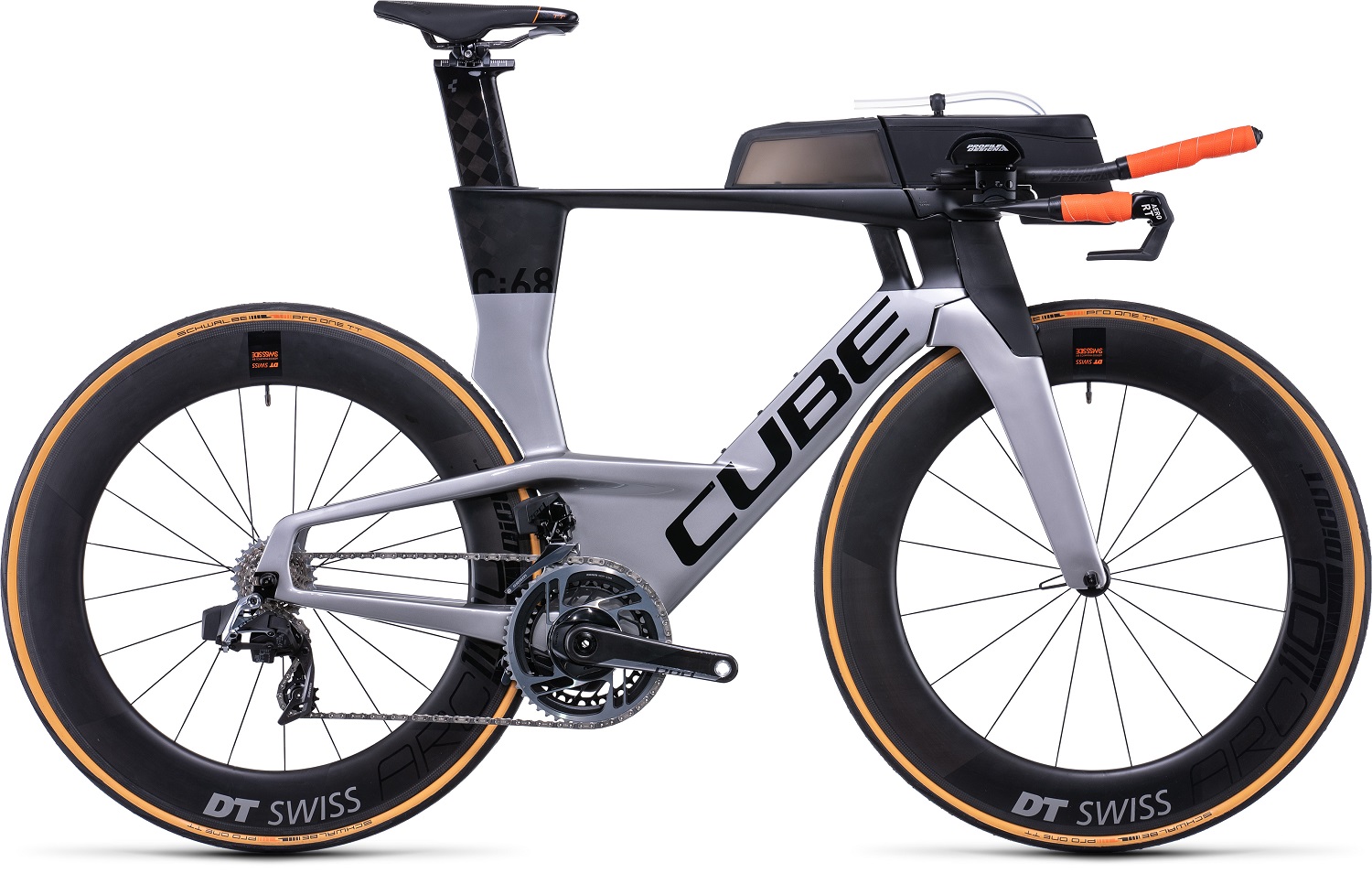 While you can theoretically take part in a triathlon on almost any bike, a rider who specialises is likely to have a highly competitive machine. It’ll essentially be based on a road racing bike but with a strong emphasis on aerodynamic positioning and componentry… very similar to the sort of bike you’ll see in the time trial races that happen all over the UK early on Sunday mornings. Short distance ‘sprint’ triathletes will often compete on a standard road race bike. 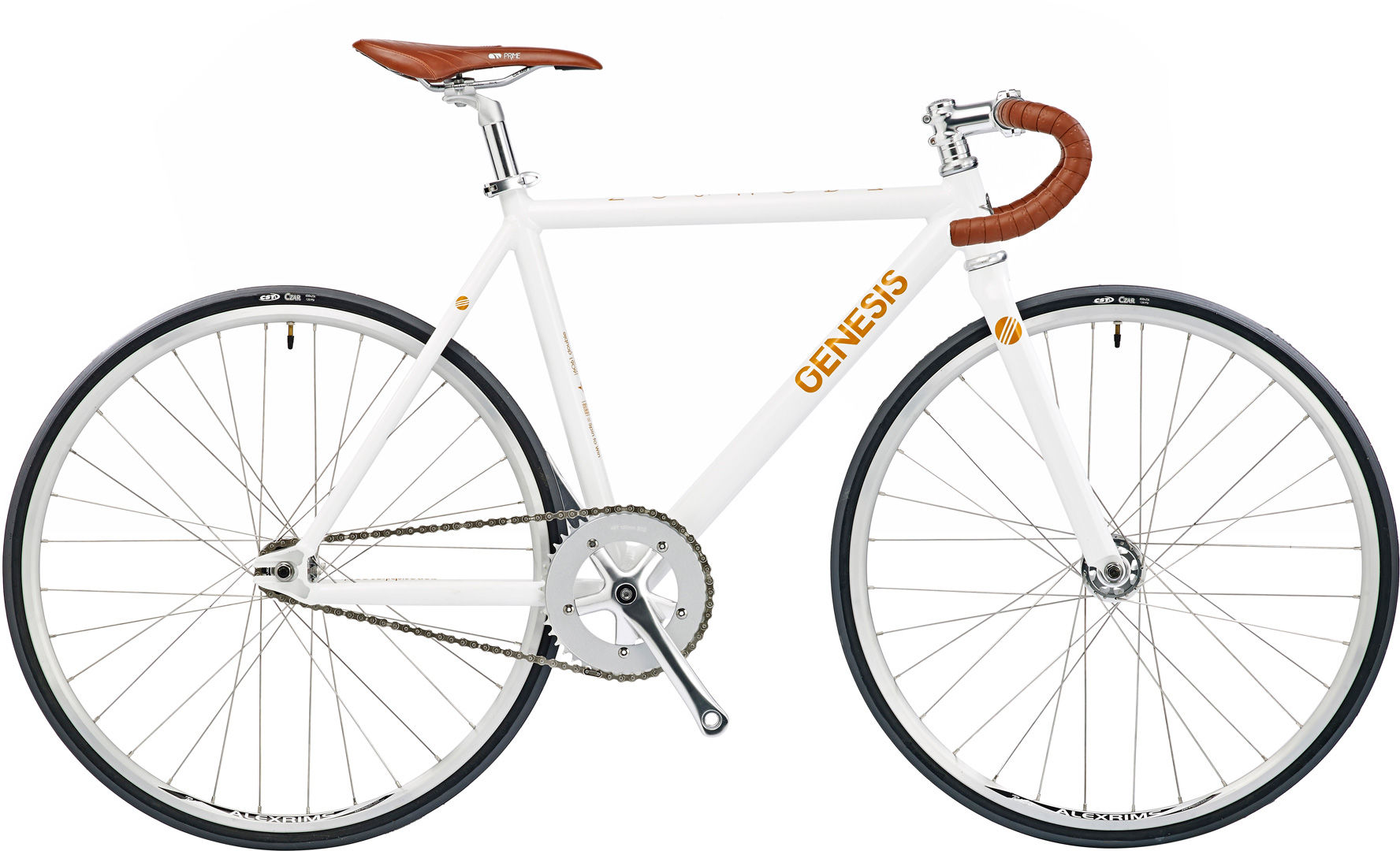 Purist track bikes come in various shapes and forms depending on the racing discipline they’re intended for, but there are loads of urban single geared fixed wheel bikes around these days too. For those who can’t or don’t want to ride with a fixed gear, a few of them come equipped with a single gear freewheel option too. A front brake makes the fixed wheel bikes street-legal as the fixed sprocket out back can be used for braking duties. 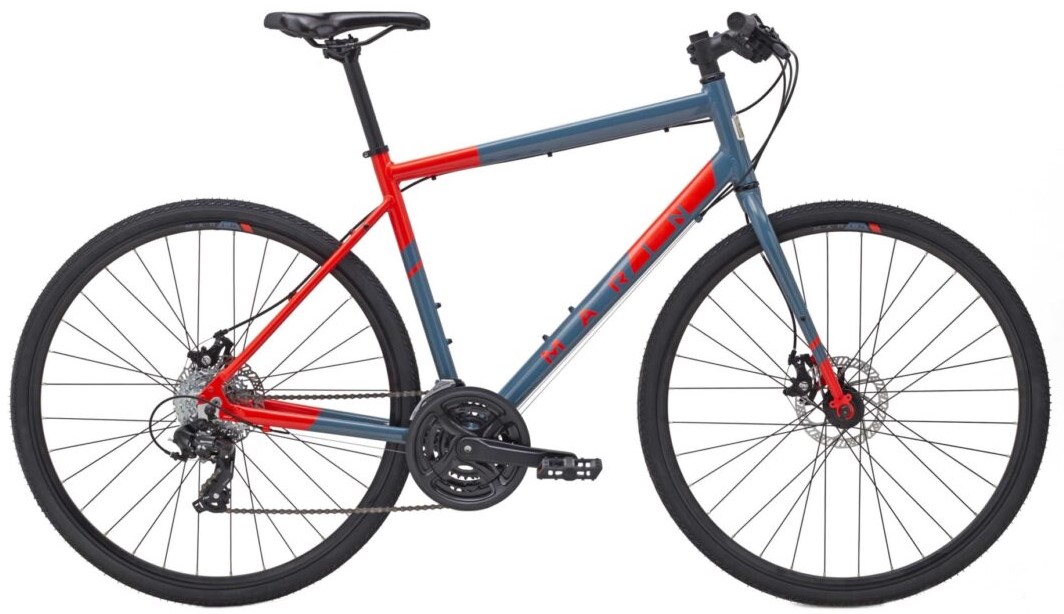 A hybrid bike is almost any bike that doesn’t quite fit into the more distinctive marketing categories. A budget mountain bike with faster rolling road tyres is a utility bike, as is a recreational road bike with flat handlebar and a luggage rack. Most utility bikes are hybrids of other bike types, with an emphasis on transport rather than a sporting discipline. All bike types can theoretically be put into use for fitness, commuting and cycle touring purposes, but you’ll find a lot of manufacturers coming up with specific marketing tags for bikes aimed at particular rider types. Look for tags such as ‘Fitness’, ‘Lifestyle’, ‘Commute’, ‘Urban’, ‘Town’, ‘Dual Sport’ and ‘Multi Use’.