The ebikes we cover in this article and sell online are all able to used in the same way as regular non-assisted bikes in the UK. Often these are called EAPC in the UK (Electrically Assisted Pedal Cycle) and EPAC in the EU (Electrically Power Assisted Cycle). There are three main parts to the ligislation of these bikes:

1. The motor will only assist you to 15.5mph. You can pedal faster than this but only on your own steam. As soon as you drop below 15.5mph the motor will start assisting again.

2. The motor only assists as you are pedaling. The bike cannot have a throttle.

3. The maximum continuous power rating (nominal power) of the motor can be no higher than 250W.

Crucially, if you buy an ebike from us you can ride it anywhere you can ride a regular non-assisted bike without worrying about the need for tax, insurance or an MOT.

The nominal power rating of ebike motors is one of the most common figures given by manufactures. The main reason for this is to confirm the motor is legal for you to ride in the UK without a licence, road tax and insurance. eBike motors in the UK must have a maximum nominal output of no more than 250 watts. The nominal power is calculated as an average over an hour of use. This means many ebike motors actually have much higher peak power outputs than 250 watts. They just wont produce outputs higher than 250 watts constantly.

The highest amount of power the motor can produce but doesn’t describe the amount of effort the rider must put in to achieve it or at what cadence (speed you are turning the pedals) it is produced.

Support shows the amount the motor can enhance the effort you put in as a percentage. i.e. If you put in 100w of effort and the motor produces 400w, this would be called 400% support but this does not describe what amount of effort is required to achieve this and how long it can be sustained.

A small removable add on battery that works in combination with an ebikes main battery. These are specially designed by the bike manufacturer to fit specific models. They are most common on light weight ebikes and are often stored in the water bottle cage during use.

Most ebike motor systems in the UK are 36 or 48 volt. Higher voltage systems are likely to work more efficiently for a given amount of cells within the battery but it is not something to be too concerned about when picking an ebike.

Full power ebike systems will normally have a battery capacity between 400 and 900 Watt hours and the motor will be able to add up to about 4 times the amount of effort you put in as a rider. Expect full power bikes to weigh between 20 and 26kg. Expect road and gravel bikes which use light weight systems to weigh between 15 and 17kg.

Light weight ebike systems will normally have a battery capacity between 250 and 350 watt hours and the motor will be able to add up to about 2.5 times the amount of effort you put in as a rider. A smaller, less powerful motor uses less electricity and in turn does not need as large a battery as a full powered bike. This saves weight from the motor, battery and generally from the bike frame too because housing the motor and battery is simpler. Expect light weight mountain bikes and hybrids to weigh between 17 and 22kg. Expect road and gavel bikes which use light weight systems to weigh between 13 and 15kg.

But which one is right for you?

For road and gravel bikes your choice will soon be limited to light weight only. For these types of riding where you are frequently exceeding the assist limit of 15.5mph, keeping the weight of the ebike as low as possible becomes much more important than outright power. So if you do want a road or gravel ebike, don’t feel short changed that the motor is not full power.

With mountain bikes you have a choice between full power or light weight, and this greatly effects the riding experience you are going to have. If you want to keep as close as possible to the lively feel of a non-assisted bike and you do not plan to ride with buddies that have full powered ebikes then light weight may be a good choice for you.

Full powered mountain ebikes feel quite different to a normal non-assisted bike or a light weight ebike. They are heavier and generally feel more stable to ride but you can cover a much, much greater distance within a given amount of riding time. New riding routes and climbs open up to you which are just not possible on lower powered bikes even if you are and exceptionally fit rider. If you are new to ebikes and want to get our and start riding and want to tailor how much you exert yourself whist still covering an enjoyable distance then a full powered bike is perfect for you.

Hybrid ebikes can cover quite a wide range of ebikes designed for slightly different uses but if you plan to ride on a mixture of tarmac and dry groomed bridleways the a hybrid may well be the way to go. The majority of hybrid style ebikes on the market are full powered and for most riders who are considering a hybrid ebike its the right choice. If you want to get out for a ride at the weekend and experience the outdoors without feeling exhausted afterwards or you are looking for a durable ebike for daily commuting then a full powered hybrid is the way to go.

If you enjoy getting out on a ride and giving yourself a workout on tarmac and groomed bridleways but do not want to venture further off road an do not like the idea of a gravel bike with drop handlebars then a light weight hybrid ebike could be right for you.

If you are looking to find out more about the performance of a specific motor then take a look a our eBike Motor Comparison.

The most common question we get asked here is how far can I go on a charge? Sadly it is not a simple question to answer. There are a whole bunch of factors that contribute to the distance you can ride on a single charge. So many in fact we have made a list below:

Don’t worry through, not all is lost. We have tools to help estimate battery range, but due to all the variables its best to do this on a case by case basis. If would like to find out more about the battery range you can expect on one of our bikes please just get in contact. 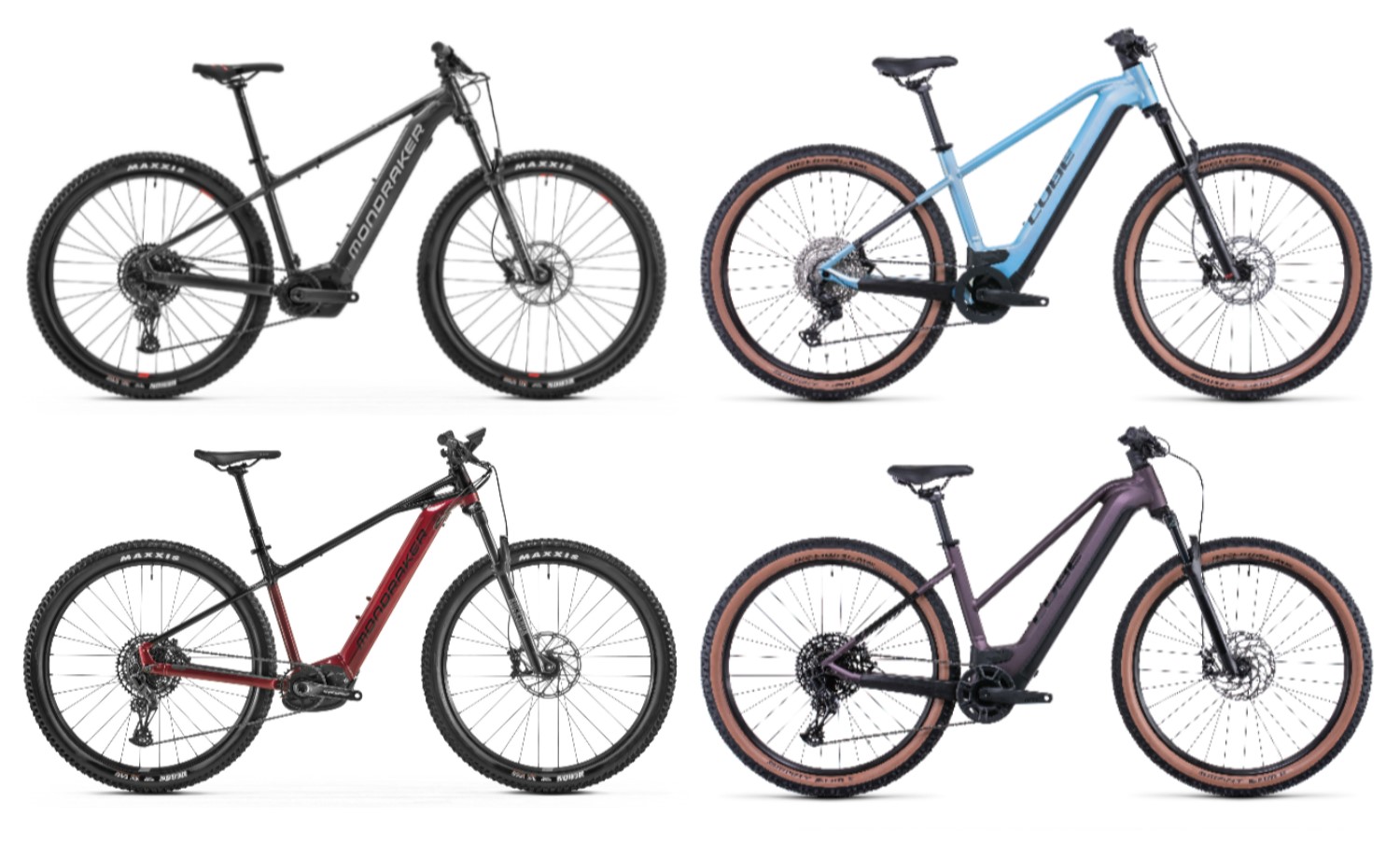 Many hardtail mountain ebikes, especailly in the lower price categories, are designed for general utilitarian use both on- and off-road. Such bikes will usually come with luggage rack mounting bosses on the frame and often have tyres with a faster rolling tread pattern for a mixture of bridleway and tarmac.

If you want to get out and ride on bridleways, flowing single track and some tarmac, then a mountain hardtail would be a great choice.

Designed for similar usage as a hardtail mountain ebikes but with the added comfort of full suspension. Perfect for all day bridleway and flowing single track adventurers broken up with sections of tarmac. You may find bike in this category are also available with built in mudguards and a rear pannier to create the ultimate utilitarian off road machine. 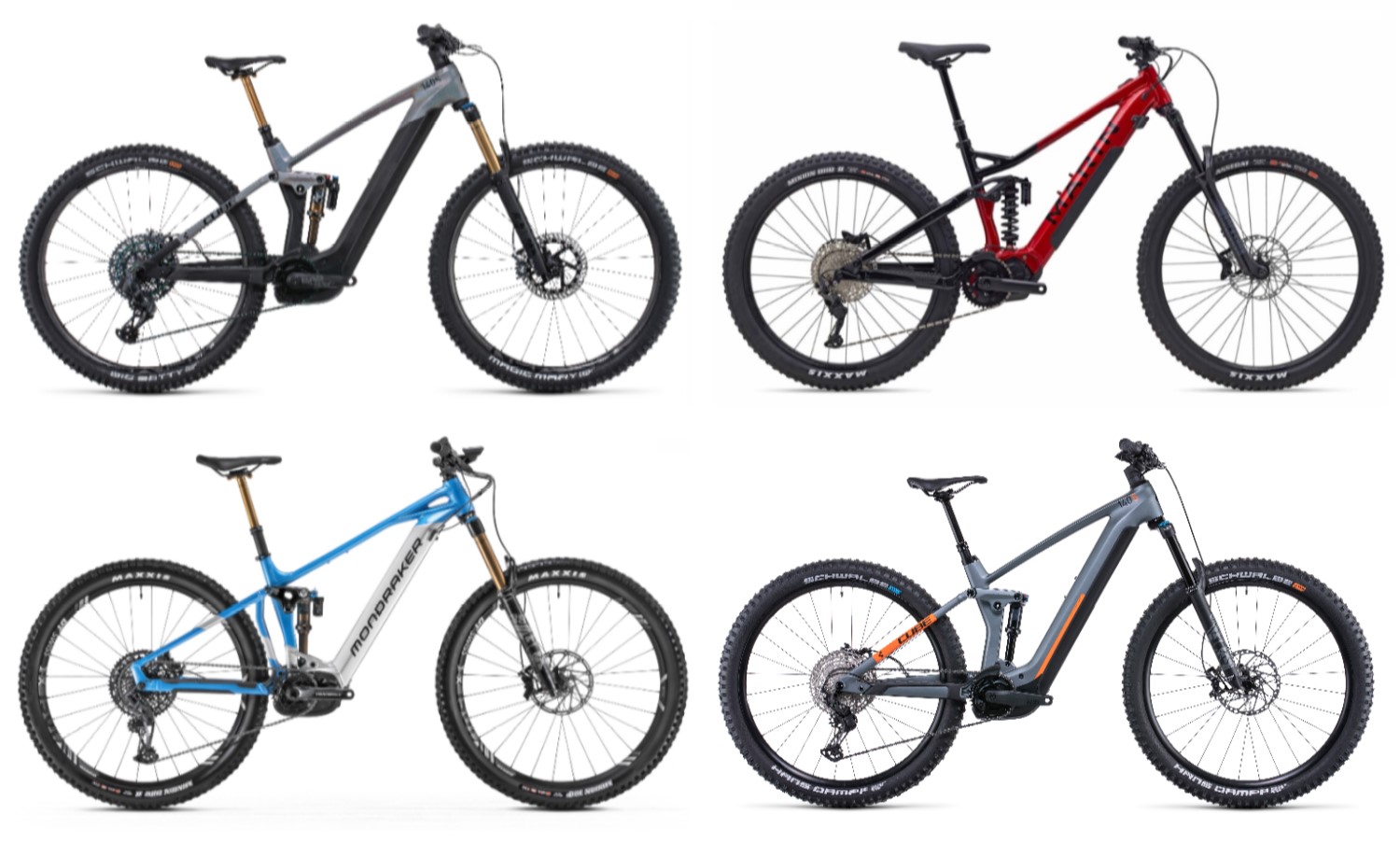 Trail Full Suspension Mountain ebikes are designed to be able to cope with challenging mountain bike trails whilst still gicing you an evolved feel on easier less challenging trails. Perfect for single day epic rides too. Genrally Trail eBikes will have between 130mm and 160mm of suspension travel front and rear. 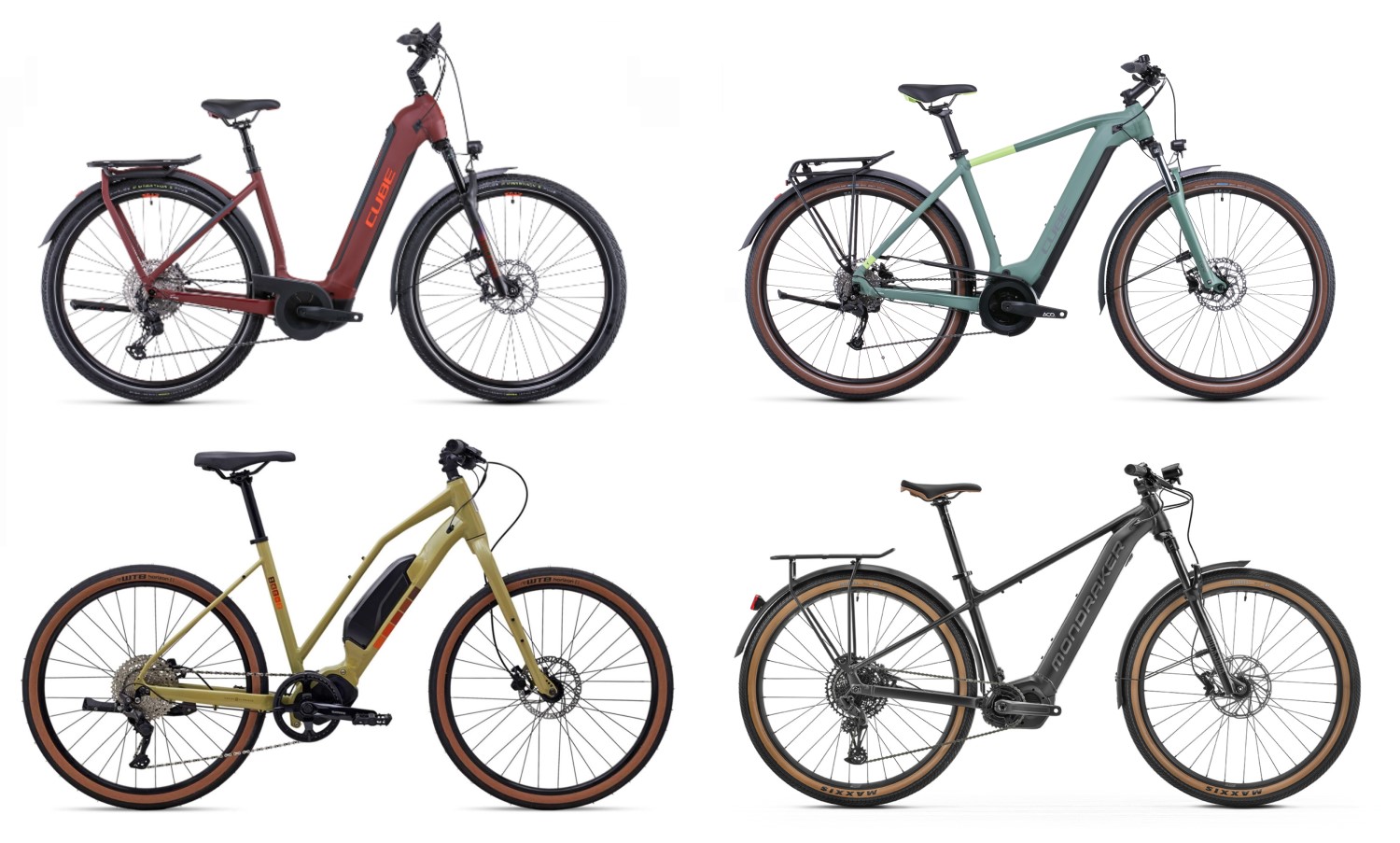 The term Hybrid can cover a pretty wide range of bike types, from a road specific ebike with narrow tyres and flat handlebars up to bikes similar to a Hardtail Mountain bike with a more comfortable position. When deciding on a Hybrid ebike, first consider if you will just be riding on the road or bridleway or a mixture of the two? Do you need to carry luggage? do you mind getting muddy? Do you need to be able to step through the ebike frame to get on? Perfect for weekend bridleway leisure rides through to the daily commute to work.

Designed for a mixture of bridleways, fireroads and tarmac. Gravel bikes have drop handlebars like a road bike which give you the option to change your hand positioning on longer rides to help with fatigue and to also get you into a more aggressive position for when you want to push yourself.

If you want to get out on the roads but want to keep your average speed up whilst climbing or you want to reduce your exertion whilst climbing, then an electric road bike will be perfect for you. You may also find new route are opened up to you that wouldn’t have been possible for you on a non-assisted road bike.